Leadville is a little town in the mountains of Colorado. The town (well, really it’s Lifetime, but that’s a technicality) hosts a whole series of races including various trail running distances and some mountain bike races. But before the race series was owned by Lifetime, before there were 7 races to choose from, there was the Leadville 100. 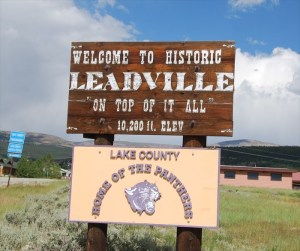 The Leadville 100 was founded by Ken Chlouber. Leadville itself was a mining town, and when one of the largest mines in Leadville shut down, leaving 8 out of 10 workers in town out of work, Ken knew he had to do something. So what’d he do? He founded the Leadville 100 as a way to bring tourism into Leadville during the economic downturn.

The first I heard of the Leadville 100 was probably the same way the majority of the rest of the world heard of the Leadville 100.. by reading Born to Run. If you have been in a hole, or just aren’t that interested in running, Born to Run is a book that basically that promotes the idea that humans were, well, born to run. That through evolution, we have adapted better than any other species to run really long distances. The book follows a tribe of people called the Tarahumara who run long distances on a daily basis. For fun. If you haven’t read it, I highly recommend.

But back to Leadville. Born to Run describes running the Leadville 100 as “running the Boston Marathon two times in a row with a sock stuffed in your mouth and then hike to the top of Pike’s Peak” (one of Colorado’s 14,000ft mountains). Then turning around and doing it all again, but “this time with your eyes closed”.

“That’s pretty much what the Leadville Trail 100 boils down to: nearly four full marathons, half of them in the dark, with twin twenty-six-hundred-foot climbs smack in the middle. Leadville’s starting line is twice as high as the altitude where planes pressurize their cabins, and from there you only go up.”
–Born to Run (page 60)

SO, what’s that got to do with me?

When Sam and I moved to Colorado, we obviously had to check out this ‘Leadville 100’ after reading so much about it.

A few months after moving to Denver in 2012, we volunteered at the mile 87 aid station (May Queen) from 12AM to 8AM. This means that we weren’t seeing any of the winner contenders, they were long gone by the time midnight rolled around. In the beginning of the shift, we were still seeing people that were rocking it and on pace to finish in under 24 hours. But by the end, we saw all the runners that were barely making the cutoff.

6:30AM was the cutoff for the aid station… as in, if a runner didn’t make it through May Queen by then, they were not allowed to continue on. Let me reiterate. These are people that had just run 87 miles. And if they came through at 6:31AM, they were done. As in, pulled off the course. It may seem cruel, but it’s a normal part of racing. The course has a time limit, and if a runner can’t maintain an average pace, they can’t be allowed to keep going. I’m sure it’s for safety reasons as well as time restrictions of being able to use all of those trails/roads, but it’s heartbreaking none the less.

This experience was eye opening and the most inspiring volunteer experience I’ve ever had. People are in all sorts of conditions at mile 87.. mostly beat down, exhausted, and a little loopy. But man, was it COOL. This is the first time my eyes opened to the AMAZINGNESS that is the human body.

In 2013, I wasn’t able to be at the Leadville 100 because I had signed up for another race on the same day without realizing. I was so bummed not to be there, and I vowed that I wouldn’t let that happen again.

In 2014, I spent a lot more time in Leadville. I ran the Heavy Half and the first 25 miles of Silver Rush 50. Silver Rush was a planned DNF (did not finish) for me. I knew I wasn’t ready for 50 miles, so I used it as a training run for TNF Endurance Challenge. However, I also had the pleasure of pacing someone for around 26 miles of the LT100.

I knew I had wanted to pace someone, but I didn’t know anyone that was running. I checked out the Leadville 100 forum, and I happened upon Mark. Mark had just turned 50 and wanted to run 100 miler. He lives near San Diego, had never run 100 before, but was determined, dedicated, and fast!

My friend DJ and I agreed to pace him the last 40 miles of the race. What an experience. Mark rocked it. He finished in under 23 hours, first in his age group. I was happy to pace someone that had some speed, so it was still a workout for me. Many runners are walking a lot at this point, but Mark was still clocking 9-10 minute/mile pace for much of the time I was with him. 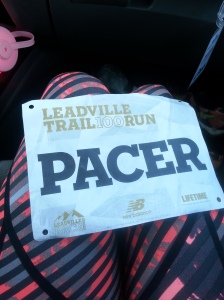 I picked Mark up at Twin Lakes and ran with him through May Queen. I’m so grateful for this experience, now that I have gotten into LT100. First, it was great experience to run part of the course at night. Second, I now have an idea what Powerline feels like.. however, I’m sure it will feel much different on legs that have already run many, many miles. Also, it’s just good to spend a lot of time with someone after they have run that many miles to have an idea of what I may be feeling like. I’m expecting lots of GI issues…

So, you could say I’ve been flirting with the LT100 for awhile. And now we’re in 2015. Also known as the first year a lottery system has been implemented for LT100. I was up in the air on whether I was going to enter the lottery. Doing my first 100 mile race, it was something I wanted control over. I wanted to click the button and be entered, not have it decided for me. But.. Leadville. I entered the lottery and was chosen. I don’t know much about the statistics of being chosen in the lottery (and can’t find anything published online), but I know of 5 people that entered and 2 that got in.. so there are your odds from a very small sample size!

Now that I’m officially in, it’s time to start obsessing over everything.

This is the race profile. Half of it, that is. You do this, turn around, and do it again. Awesome, right? 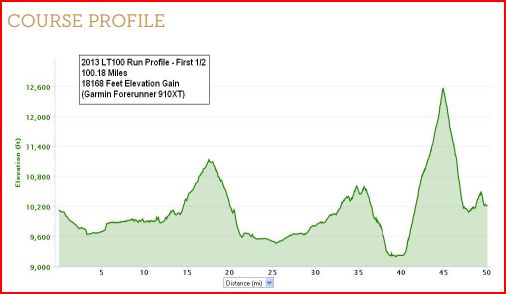 The total gain is over 18,000ft. It starts at an elevation of 10,200ft and ranges between 9,200ft and 12,620ft. Yikes, right? This video can probably explain the real highs and lows of this race. Hint: they aren’t the elevation. As a bonus, my baller coach Mike Aish is also featured. And he lies in it, he will be back.

There really is nothing more amazing than running in the mountains for hours. I’m sure I will write more on the race preparation in the months to come, so stay tuned. In the mean time, here is a quote from Ken. I dare you not to be inspired.

← Carlsbad Half Marathon 2015 | Race Report
Trying to be a Triathlete →