This was the first audible of the trip. (Danielle edit: I watch football, and I didn’t know exactly what his “audible” reference meant. It means “a change of plans”).  Peninsular Malaysia was not on our original itinerary, but when we decided to head to Koh Tarutao we figured it would be easier to go to Malaysia next rather than backtrack the entire length of Thailand to go to Cambodia (as had been the original plan). This is the best thing about not booking too far ahead…flexibility! This decision resulted in some major seat-of-our-pants itinerary development since we had done no research on places to visit prior to leaving. We basically took this sample itinerary and removed all beachy locales (we were a little ‘beached’ out after Thailand). Most every blog we read and person we talked to recommended spending at least a couple of days in George Town/Penang “for the food.” Like most humans, Danielle and I enjoy food, so we figured, “hey, let’s go to the food place.”

At this point you might be wondering, “was it worth it?”
To which I would respond, “YES IT WAS WORTH IT. STOP ASKING QUESTIONS AND BOOK A TRIP TO PENANG RIGHT NOW.”

If you couldn’t tell, I love Penang. Side bar – let’s talk nomenclature. Penang is a state in Malaysia. This state is comprised of a small section of land on the ‘mainland’ and an island (aptly named Penang Island). We spent all of our time on Penang Island, specifically in the city of George Town (can you tell it was a British colony?). So when I say, “I love Penang!” this really means, “I love the part of Penang I visited!” or more accurately, “I love George Town!” You’ll notice me using Penang, because that is the way I have gotten used to saying it. In Kuala Lumpur, the locals would ask, “have you been to Penang yet?” not, “have you been to George Town yet?” Plus, Penang is so much more fun to say. Penang. Penang. PENANG! End side bar.

Back to business. Penang was awesome. Why was it awesome? I’ll give you three reasons:

With that, let’s jump into the fun details.

Video
The one takeaway from all of these videos I have created? Don’t judge a video by the music. Watching YouTube videos in the past I would think, “I like this video, but why did they pick this song?” And now I realize, “because they had to pick one song out of 150,000 randomly sorted songs ranging from awful to not quite good!” Every time I publish a video I think, “well, I don’t care much for this song, but I didn’t like the other options either and I’m getting tired soooooo…”

Getting there
High Level. Bus from Pak Bara to Hat Yai. Train from Hat Yai to Butterworth. Ferry from Butterworth to George Town.

Eat
I’m breaking this down into two sections. What and where.

What. Below is a list of the foods I KNOW we tried.

Where. Food is available everywhere in Penang. But it is famous for its ‘hawker’ stalls. Hawker stalls, food stands, food stalls, food trucks…whatever you want to call them, they are everywhere. Sometimes, there are groups of food stalls in a parking lot. Other times, they have open air food courts where each vendor has a small brick and mortar stall encircling a group of tables. Similar to a mall food court you would find in the States….just without the mall portion. This website has a great map of recommended hawker food stalls in Penang. We went to most of those listed and also wandered around the streets and found smaller hawker gathering places.The great thing about the hawker food courts is that you can try so many different foods in one meal.

When we went to New World Park, we sat down at a table and took turns going to different hawker stalls and ordering food. Sometimes, we had a plan – “that banana pancake stand looks good, I’m going to go grab one of those.” Other times we blindly ordered something, like the time Danielle returned to our table with Asam Laksa:

Overall, from our experience it is hard to go wrong when it comes to choosing a place to eat. New World Park and other tourist focused markets are going to be a bit more expensive, but you’ll have a great variety. Random street vendors will be cheaper, but require more walking. Can’t decide? Visit them all!

Do
Super bowl watch party at C&J Alabama Shakes Bar. This was the only place in town showing the game and they charged a 15 RM (a little less than $4 USD) cover charge. Any other year we probably wouldn’t have gone, but the Denver Broncos were playing and it was fun to do something so American on the other side of the world. A little piece of home.

Little India. We ended up spending a good deal of our time in Little India since it was Chinese New Year and, as a result, the rest of the town was shut down. Regardless, this place was awesome. Great street food, Bollywood movie posters in the doors, music blaring, colorful sarees for sale in every other window, spice shops. Fun place. Did I mention the samosas? Or banana balls?

Kek Lok Si Temple. This experience was definitely improved due to the Chinese New Year. Typically, this is a beautiful Chinese temple built into the hillside on the outskirts of town. During Chinese New Year, however, they put up thousands of lanterns, string lights, and other decorations and turn them all on at 7:30 PM every night. Gorgeous.

Fitness
Trail run at Penang Hill. Penang hill is the highest point on Penang Island, just west of George Town. There are three ways to get to the top of the hill: 1. Drive, 2. Hike/Run from the Botanic Gardens, or 3. Take the tram. Most people take the Tram. On TripAdvisor, Penang Hill has mediocre reviews which I can understand. The views from the top aren’t spectacular and other than the views, there isn’t much else going on – a small, overpriced cafeteria, some walking paths, and a new garden-y type thing. So if you are taking the Tram, maybe it isn’t worth the price of admission. But running, it was a lot of fun. We found these two blog posts (here and here) to be very helpful in explaining the path and how to get there.

The run itself was challenging. We ended up missing a turn at the top and it took us a little longer than we were expecting. We bought some drinks and snacks (white coffee and mango ice!) at the cafeteria and then headed back down. The part of the run we will remember the most, however, is ‘the snake’. I put quotes around it because we don’t know exactly what kind of snake it was.

Let’s rewind shall we? Danielle was leading the way. Around 1.5 miles into our run she suddenly stopped and shouted. Sure enough, a huge dark brown (I saw dark brown, Danielle says it was more black) snake was slithering off of the path to our left. I only saw the last part of its tail leave the path and then saw it again further down to my left as it went in front a large boulder. To my eye, it was HUGE. I swore it was at least 6 feet at the time, but accounting for mis-remembering and our natural inclination for exaggeration I’ll settle for it being AT LEAST 4 feet long. Initially, Danielle thought it was another monitor lizard so the thing had some girth too. Color wise, it didn’t have any memorable markings (no bright colors) and we did not see its head. We spent a good half-day speculating but in the end we’ll never know what it was for sure. But at least we survived our first SE Asia snake experience! Strava HERE (up) and HERE (down).

Yes, please
Penang Hill trail run. Minus the snake. And there was also a monkey that tried to attack Danielle, but that is common place by now.
Samosas. Deep fried deliciousness.

No, thanks
TCF Bank. Since this was our first city in Malaysia, this was also the beginning of the ‘Cash Crisis of 2016’ sponsored by TCF Bank. We spent a good 12 hours in Penang walking to different banks, talking with our bank on the phone, or trying to find money exchange vendors who were open during Chinese New Year. More on this later.
Asam Laksa. We tried it twice, but weren’t all that impressed. Super fishy.
Timing. As much fun as it was to see the festivities associated with Chinese New Year, it was also a bit of a bummer to have so much of the city shut down during our time there. And when I say shut down I mean SHUT DOWN. Like Christmas Day in the USA, but for four days (I’m guessing actually much longer, but we were only there for four days). 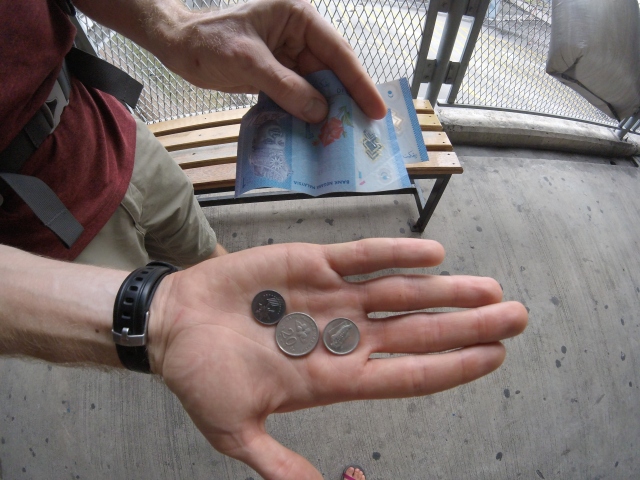 Money given to us by a kind stranger so we could take the ferry to Georgetown. 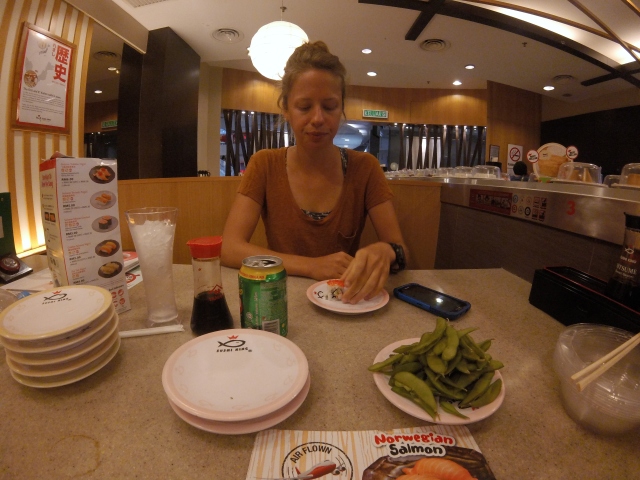 Eating awful overpriced sushi at a chain restaurant because 1) we were starving, and 2) it was the only place we could find that accepted credit card when we had no cash (see: banking issues).

Lam Mee. Danielle also asked for this vegetarian, but it seems that a lot of people here don’t consider seafood to be meat. 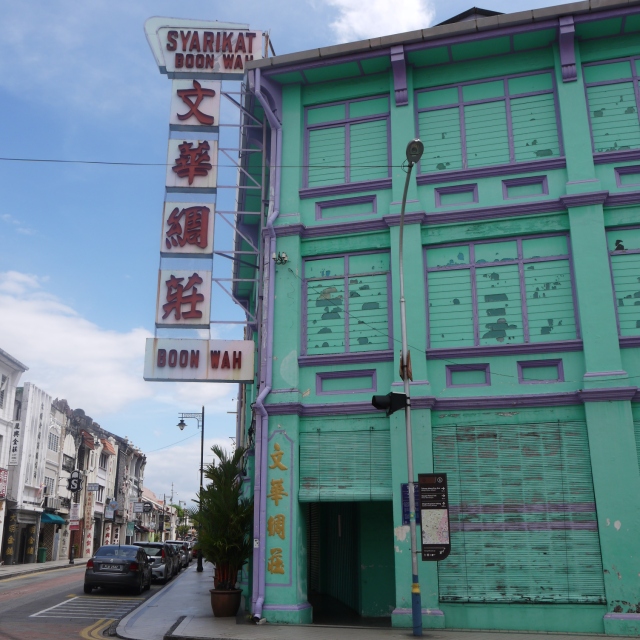 George Town street art. There is street art all over the city done by some guy (not this exact piece).. but we didn’t see much of it unfortunately. You can Google more if you are interested. 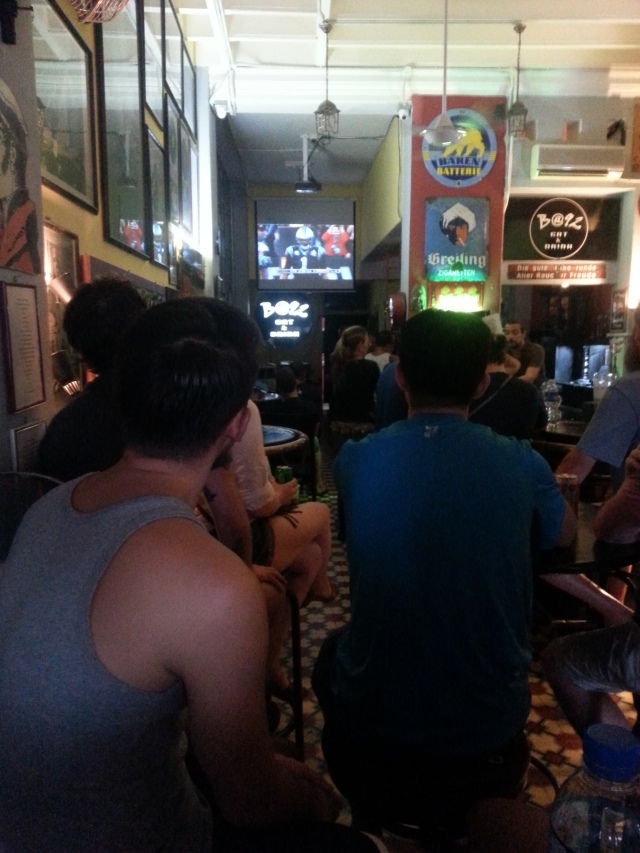 View from top of Penang Hill. 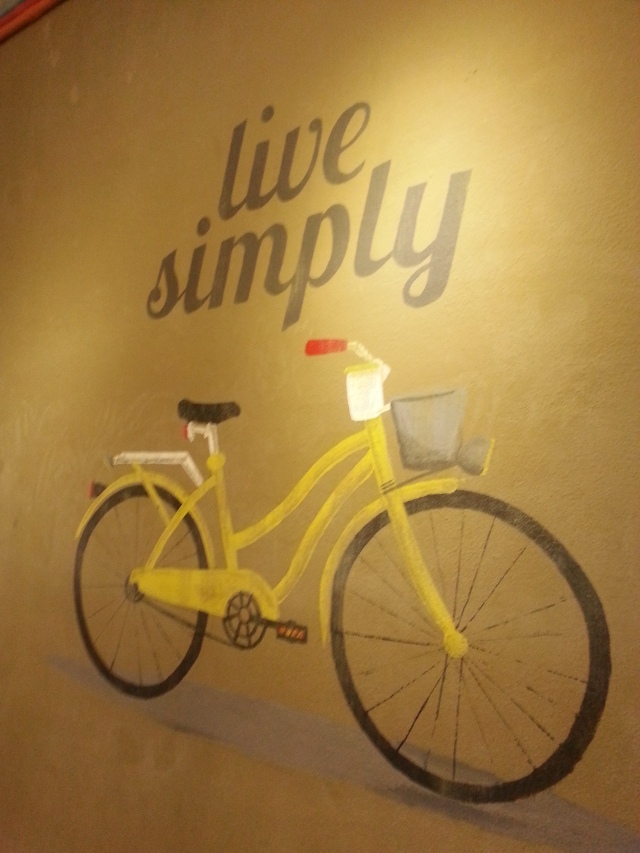