We have finally hit summer, and I couldn’t be happier! Well, actually, I could be a little bit happier. You see, I have hit a minor snag in my training and haven’t been able to run for a little bit. I’m hoping things are on the mend now, but I’ll keep you posted!

In other news, I have been making good progress on my summer adventure checklist! In case you missed it, a few months ago I wrote a summer adventure check list. To date, I have hit 4 of the 10 items. You don’t need to be a math nerd like me to know that’s pretty good for how much of the summer has passed!

So, what have I done so far?

If you don’t remember, Magnolia Drive is a stretch of road that the CU Buffaloes train on. It starts at about 8,000 ft, and the road that you take to get up there is a gnarly one. I wouldn’t recommend driving that unless the roads are clear, but I’m a cautious person. DO NOT start running at the start of the road. I don’t think you will make it very far. You want to start your run where the pavement ends and the dirt begins. Right at this point, you will see some space on the side of the road where you can park.

From there, you have 8 miles of rolling dirt road to enjoy. I only did 7 of it out and back, for a total of 14 miles, but I feel like I got a pretty good idea of it.

Overall, I really liked Mags. She was pretty to look at, she got me running up at 8,000 ft, and for a dirt road, still managed a bit of climbing over all those rolling hills. 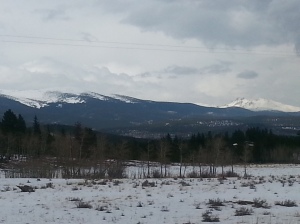 Garmin data, if anyone is curious.

The Colorado Trail is kind of a tough one to cross off the list, since I could definitely do more. It is a 500 mile stretch of trail in Colorado that goes from Durango to Denver. But, since I have a lot to check off, we will count it as a win for now, but I’m totally open to running more of it!

I’ve had two excursions so far on the Colorado Trail. The first is segment one, which starts at the end of Waterton Canyon, right outside of Denver. I feel like this doesn’t really count, since I only did a few miles on it. It starts with a climb though, my goodness!

The second one was a few weekends ago in Buena Vista. I started one direction, and I climbed a mountain for about two miles. I’m going to blame the snow pack at 10,800 ft as the reason I turned around, but really my shaking legs probably played a part in it. The trail climbed around 1,600 ft in the first two miles, and it just kept going up from there. I decided to save my legs for the other 18 miles of the run and to turn around. 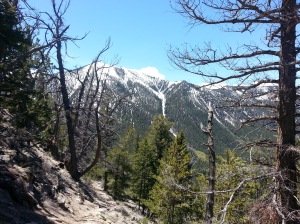 The other side of the trail was great. It had gently rolling hills and just the right amount of climbing compared to what I did in the first few miles.

Overall, it was actually a tough run for me. I think I burned myself out on the first few miles, and the rest of it was mentally tough. Thankfully, I had these two along with me for 13 miles of the run. I can’t believe they ran 13 trail miles! Impressed mama here! 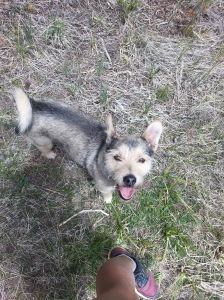 It is still one of my goals in life to hike the whole Colorado trail, and this run only reiterated how cool that would be.

Unfortunately, I don’t have any pictures of us rafting since I was worried about the whole phone falling into the river thing. We did a full day excursion through Arkansas Valley Adventures (AVA) based out of Buena Vista (or at least they have a post there). And when I say full day, it was really like 9am to 1pm. We did the Numbers section of the Arkansas river followed by the Narrows section which lands you in Buena Vista.

It was SO MUCH FUN. The water was actually a bit lower than we anticipated (and therefore the rapids were a little bit more tame) because it has been so rainy/snowy/cold in the mountains, so a lot of the snow pack hasn’t melted. It was still awesome though. I highly recommend this route and this company. I would love to do more rafting.

Also, Sam and I really enjoyed the town of Buena Vista. It had great little restaurants and watering holes, but it didn’t feel overly touristy. It’s also at a lower elevation but SURROUNDED by amazing mountains. Check it out.

We had a good friend of ours visit this last weekend, and he wanted to do the incline, so we went for it! The incline is about a mile “hike” up a mountain. You gain around 2,000 vertical feet in that mile. 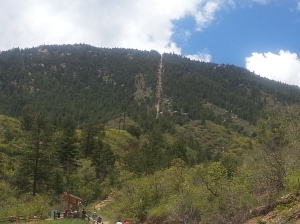 This is where you start. See that tiny line in the mountain? That’s what you climb and where you end. 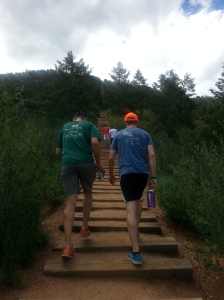 It was tough, but I liked it! I had to chase these two butts up the whole time. They don’t mess around.

We made it to the top! I think Sam probably did it in around 36 minutes. I was maybe around 40 minutes. Our friend Peter was in between. After that, we got to take a little run down the Barr Trail. Well, I walked unfortunately, but I think it would be a BLAST to run it.

Colorado, you sure are a looker.

Alright, 6 to go! Bring it on summer!