As any runner (or athlete in general) knows, being injured can do crazy things to your head. I know that sounds dramatic, but gosh, I hope it’s not just me.

The “incident”, as it shall henceforth be called, happened on June 3. I was supposed to be doing a tempo trail run that day, but the torrential downpours that have been far too common in Colorado this year had other ideas. I went to the trail, but within a quarter mile, I knew it was a lost cause. I had no traction, and I was just damaging the trail.

In hopes of salvaging the workout, I began the tempo on a nearby bike path. Bad idea. Pavement hurts. During the last segment of my tempo, I felt something.. wrong. I can’t exactly remember what happened, but something happened in my leg, near the high hamstring, and I really couldn’t comfortably run anymore. Me, like an idiot, hobbled through the rest of the tempo, and attempted a few minutes of cool down before I threw in the towel. But hey, I finished the workout! Dumb.

I didn’t take it seriously, until the next few days that I couldn’t run without a pain in the butt. Literally. So began a miserable few weeks where I couldn’t run, and I contemplated whether I would still be able to do Leadville 100. Without my kick ass coach and PT, I probably would have thrown in the towel right there.

I am finally back on the road to being healthy. I’m not all the way there, but I think I am about 90%. Last week, I was able to get a full week of training back in. This week, I will be attempting Silver Rush 50. I will be taking it easy, and if my body tells me that enough is enough, I will drop out of the race. The ultimate goal is completing LT100, and I need to remember that. Because I hate quitting races.

I turned a bit more obsessive about my training during the period that I couldn’t run. Some of the lower points prior to the 6/1 date were either due to step back weeks or more short and intense workouts rather than long mileage workouts. Following the “incident”, there were three low weeks. The last two weeks, however, have been really good. 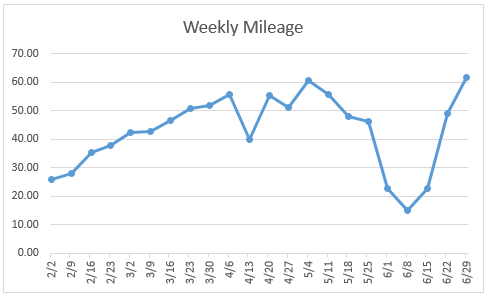 Last week, I hit the highest weekly training mileage since I started running! My long run was 18 miles, tackling one of the hardest portions of the LT100 course, the double crossing of Hope Pass. You can see this portion circled in the elevation profile in the chart below.

Somewhere on the backside of Hope Pass.

The next morning, I was able to do the first and last 14 miles of the course. It also wasn’t ugly. The next time I run this route, it will be dark. The time after that, at mile 85, I definitely will not be enjoying it, so I tried to soak in the beauty as much as I could.

Around Turquoise Lake.. back to Leadville!

This weekend will be the true test: Silver Rush 50, which is a 50 mile race in Leadville. A 50 mile training race. If only high school Danielle could see me now. See you on the other side!