Sapa is a small mountain town located in northern Vietnam. The main attraction in Sapa is trekking due to the beautiful surrounding mountains and rice terraces and the interesting culture of the hill tribes.

Views of the rice terraces in Sapa.

Sam and I hemmed and hawed for quite a while about whether we should go to Sapa, Vietnam. It is a commitment to get there as it requires another overnight trip (this time on a train), and we’d also heard mixed reviews on the deteriorating condition of the town and the experience due to the massive tourist boom.

The main issues we read about were:

In the end, the promise of some ethical trekking companies and the desire to get out of the heat and into beautiful mountains was enough to convince us to make the trip to Sapa. So how did expectations compare to reality?

The Town of Sapa

The trip into Sapa involved an overnight train ride from Hanoi to a small city called Lao Cai. From there, you take an hour minibus ride to Sapa. I’d read terrible things about the windy ride into Sapa and how many people get carsick. I’m prone to carsickness, but it really wasn’t too bad. Our driver went at a reasonable speed… but that probably varies.

As we already mentioned, the town is growing like crazy with tons of construction going on and a fair amount of trash. It isn’t a reason that I wouldn’t go to Sapa, but it was noticeable to me. I think it’s best to have realistic expectations. This definitely isn’t a quaint little mountain town. This is a town booming with tourism. As we expected, there were plenty of girls dressed in traditional tribal clothing selling their crafts. But honestly, it wasn’t as bad as I had read. I read a lot about how insistent the girls were, how they would follow you around until you bought something, that their insistence could make you uncomfortable.. we didn’t have any experiences like that. It seemed like pretty average touting to me. I’m not sure if we were lucky or we just didn’t look like suckers, but a firm “no, thank you” or “I’m not shopping today” seemed to do the trick for us.

We only stayed in town about a day, so my impressions are pretty limited. The food was fine, a bit limited and Westernized, but what do you expect? The only other real takeaway from the town was the track (a running track). There was a track in Sapa (which is mildly impressive given that it’s a town of 3,000 people in the mountains of Vietnam). However, the track was definitely Vietnam-ized. There were several semi-trucks and mini-buses parked on the side of it. There were a few kids biking around on it. There were some stray dogs just hanging out in it. A few mopeds cut through it as a shortcut to another road. We thought we would finally have an easy run in Vietnam, but alas, it was not to be. But it was still entertaining! Strava data located HERE and HERE.

The company we decided to go through was Ethos. Ethos was a bit more expensive than some of the other companies we looked at, but we decided the extra cost was worth it. Ethos focuses on benefiting and empowering the local minority tribal people (which was one of my main concerns about coming to Sapa). We were really happy with our experience with them.

Our guide was Cha, and she is part of the Black Hmong tribe. (There are various different tribes in the hills of Sapa). She was 38 years old and has 3 children. She married when she was young (around 16 I think?) and had her first baby soon after. Her older two children are both already married. Her daughter went to live with the husband’s family (as is customary), and her son’s wife now lives with her, her husband, and her youngest son. I think the son who just got married is around 16 years old. Wow!

Sam and our guide, Cha!

Cha’s work ethic just blew me away. She was literally doing something (making dinner, cleaning dishes or clothes from the hose fed from stream water, feeding animals, etc.) from the second we got to her house until she went to bed (after us) and then again before we got up the next day (which was at 5am). She’s been learning English from an early age just from speaking to tourists. She is currently learning Vietnamese, and she is also learning how to write several languages (I think her language, Vietnamese, and English). She never went to school as a child, but through her hard work, she has created what appears to be a good life for her and her family. In general, it seemed that those who could speak English had more opportunities than those that could not. Cha’s daughter and daughter-in-law do not speak English, and they work in the fields growing crops. I believe her husband and son also work in the fields.. I’m not sure if tour guiding is as much an option for men or not. It seemed that all the guides were women.

One other tidbit that I want to share about Cha is the story of the first time she saw a foreigner. When she was a young girl, a white man tried to talk to her in Sapa town, and she was terrified. She hurried back to her home and told her mom how scared she was of this strange person in town. She thought he wanted to do hurt her! Her mom reassured her that he was just from a different place where people are very tall and have pale skin. But her first reaction was to run away from him as fast as possible (whereas now, most Hmong women flock to tourists!). It’s interesting how quickly the times have changed, just 30 years or so later, when there are now as many tourists in Sapa as locals.

To be honest, the trek was just okay. But this is specifically for Sam and me. And this is absolutely not a strike against Cha or Ethos; we just weren’t fans of this type of trek.

Part of this probably comes from the fact that we had recently been in Nepal. The trek in Sapa was not remote. You were able to take taxis from different points in the trek to get to other points or if you wanted to end the trek early, you could “hike” to a taxi point to pick you up. There were times that we were “trekking” on a road as cars went around us. I think there were probably more remote treks, but not in our time frame. And really, we got what we wanted out of the trek, which was a cultural experience. We were able to learn so much from Cha. It was awesome to see her house and to spend the night with her family (even though we rarely knew what they were talking about, that was part of the fun!). Out of our entire travel experience, these people live the least like us, and it was eye opening. 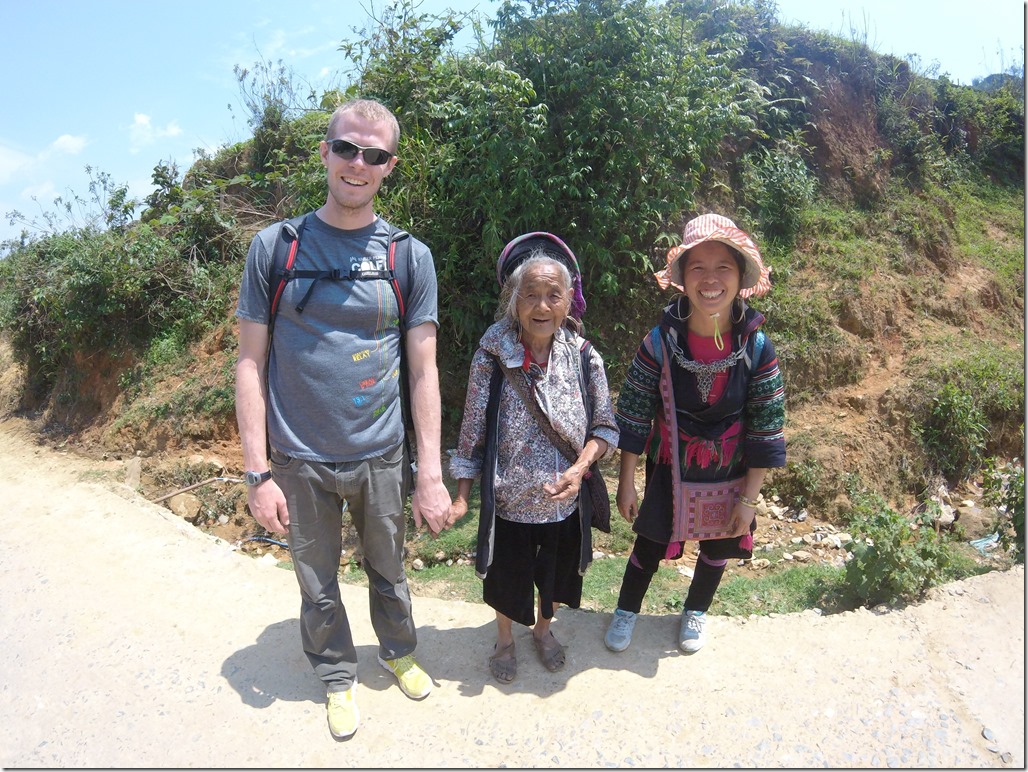 Sam with a few of the locals.

This Vietnamese teacher just wanted to take pictures with me. It was adorable.

I don’t want to knock the trek completely. There were some pretty stellar moments (like walking along rice terraces as farmers worked right next to us and locals who just wanted to take pictures of us and kids rolling tires down hills with sticks), and the views of the mountains and rice terraces were pretty incredible. But we were pretty happy to be done early on the second day. Once again, I blame Nepal. 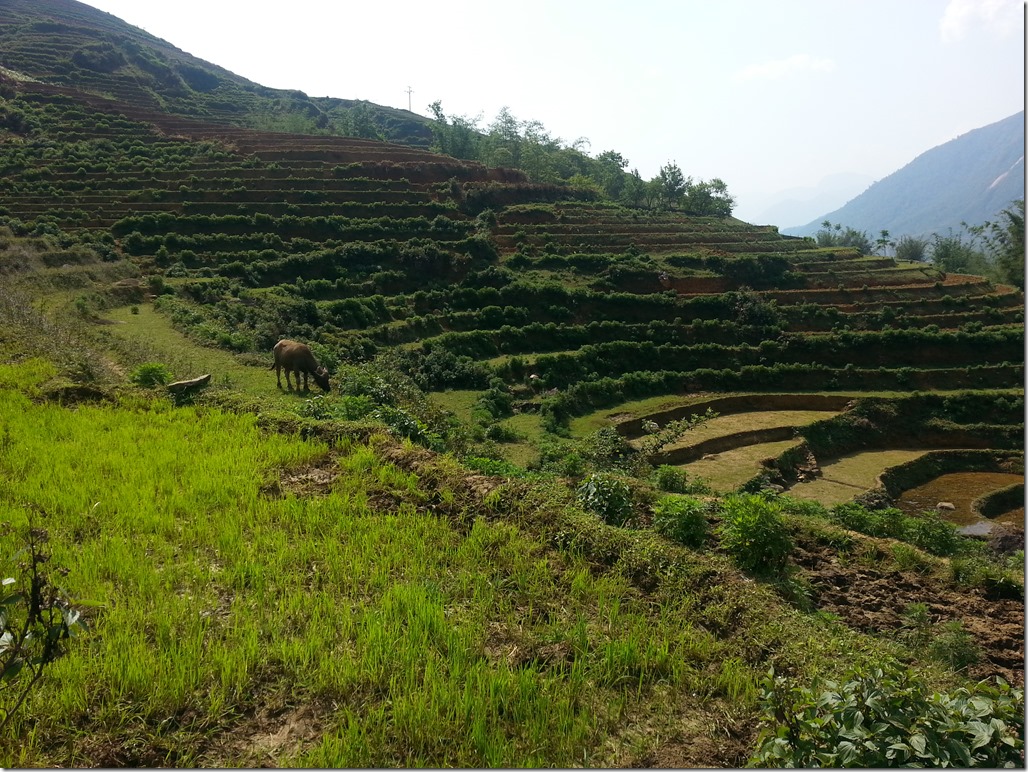 THE FOOD WAS AMAZING. We went to the Sapa market with Cha to buy food for both lunch and dinner. She bought all sorts of vegetables as well as some meat and tofu. (Side note, at the first market we saw a dog’s head on the table next to dog meat. Horrifying.) She cooked both meals over a small fire in the house. I don’t think she used more than one cooking pan, and I think the only seasoning she used was salt. However, the food was absolutely amazing. Super flavorful, and she managed to make about six different dishes. I was incredibly impressed (and full). At lunch, we ate at one of her friend’s house en route to her house, and the father of the family gave Sam and I homemade rice wine. It tasted like moonshine, but we drank it anyways. 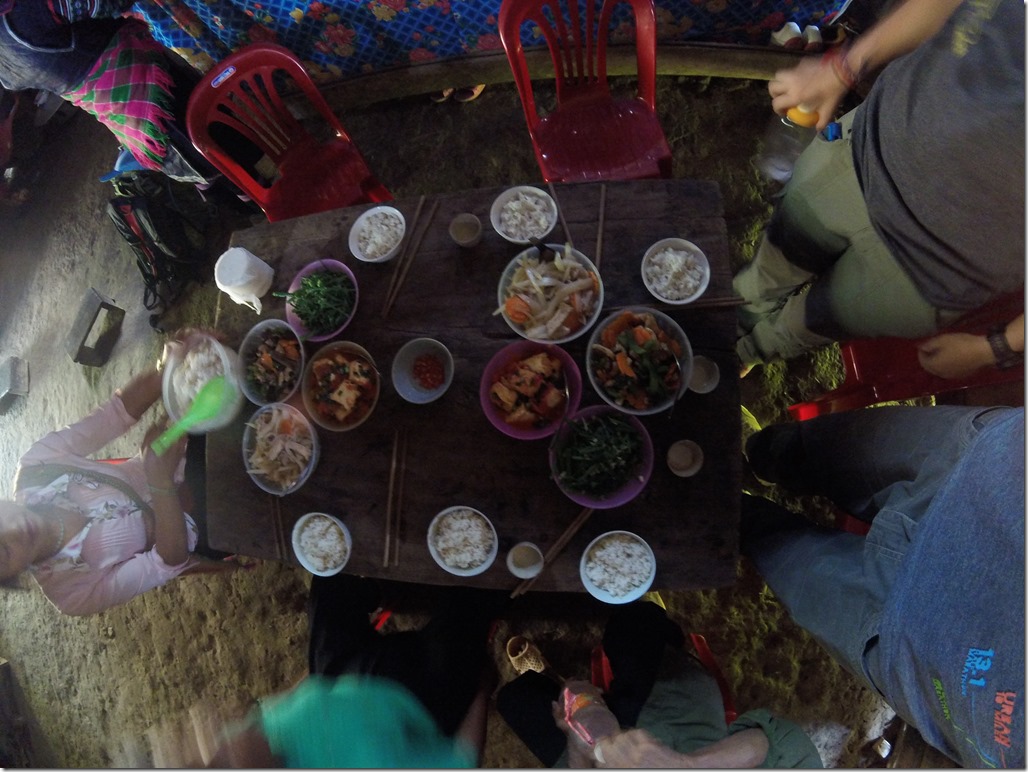 The delicious meal that Cha prepared for us.

We stayed the one night at Cha’s house with her family. The house is certainly worth explaining. It is essentially a one room hut with a packed dirt floor. When you first enter, there is an open area with a table for dining. To the left is a small “kitchen” with a fire pit for cooking. Most of the smoke from cooking and heating just hangs out in the house. Above the fire is a suspended platform where rice is dried. Tucked into a corner of the house was a small room big enough for a bed with a mosquito net and separated from everything else by a curtain. This is where we slept. Then, there was a ladder that led to a small loft around part of the house. This was used for storage, but also had enough room for the two sons and daughter-in-law to sleep in (we think.. people just kind of disappeared). I have no idea how we all slept in that house (7 people in probably 250 square feet). It really puts minimal living in perspective. Oh, and their alarm clock is a rooster at 3:30 AM.

Cha’s house on our trek in Sapa.

Sam often hit his head throughout our time in Southeast Asia. 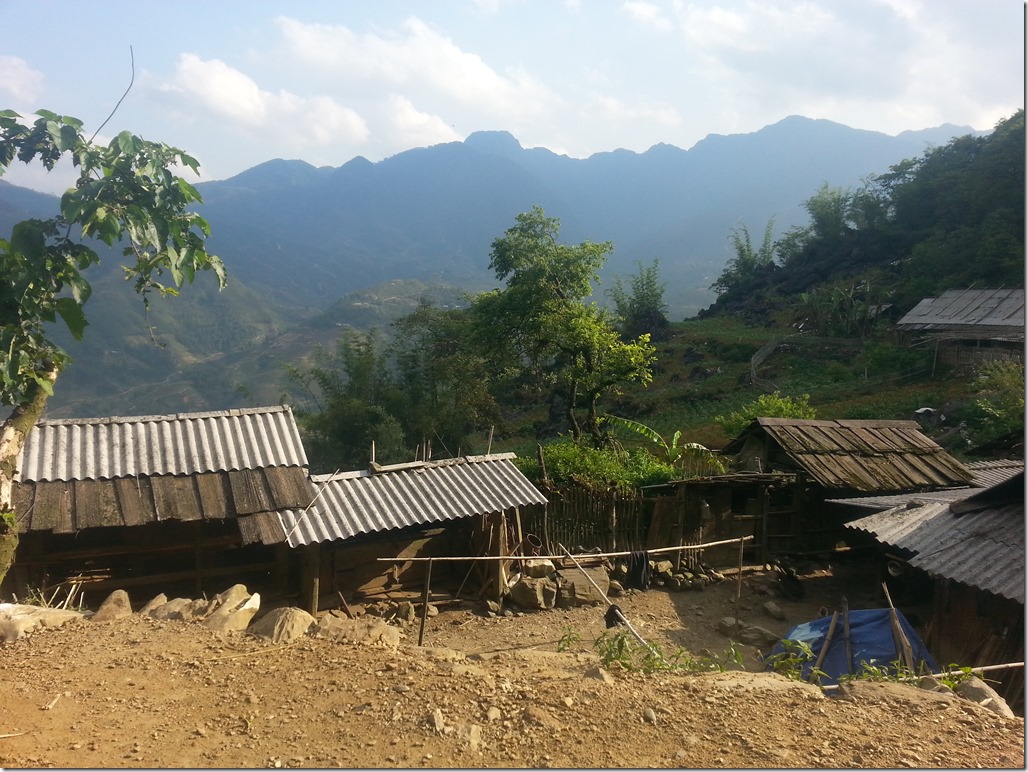 The view from Cha’s house on our trek in Sapa.

We paid a total of $164 USD for the 2 day trek for both Sam and me. This includes tip. It’s a bit more expensive than other guides you can find, but we were happy to support Ethos’ mission.

So many rice terraces!

Overall, we are really glad we went to Sapa. The best part about Sapa, though, is getting out of Sapa. Go on a trek. Preferably one that benefits the people that have lived in Sapa for hundreds of years, and not just those that have recently moved in to reap the benefits of the tourist industry. 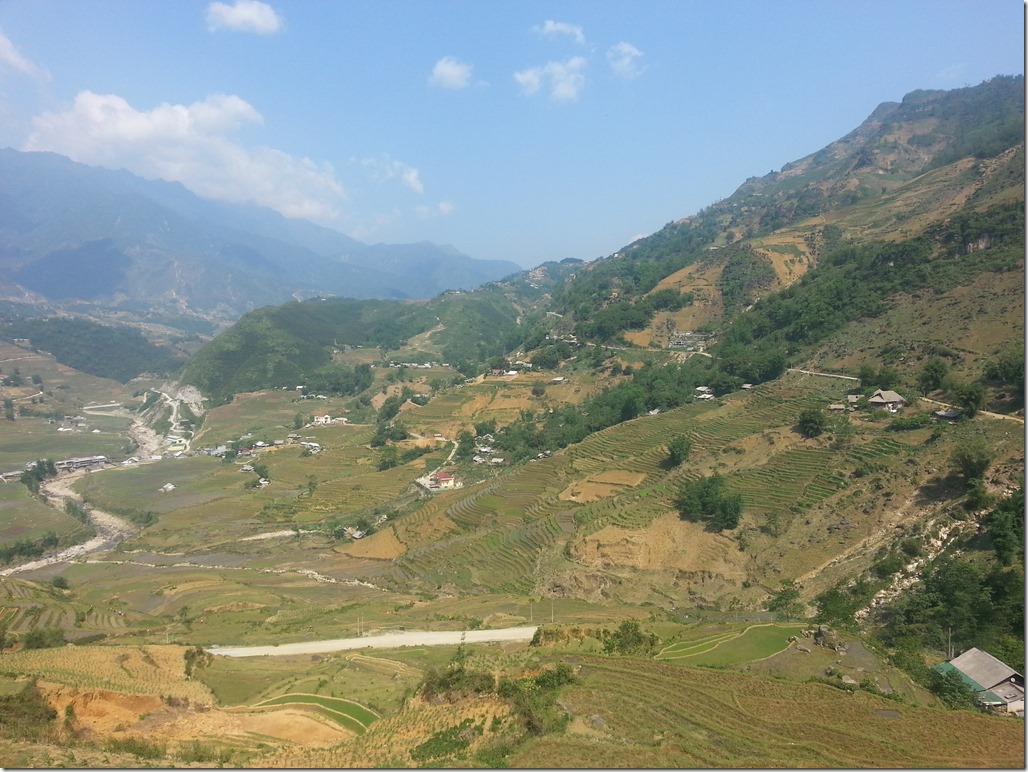 The beautiful views from our trek in Sapa.

Tags: Eating on trek in Sapa, Ethical travel in Sapa, Ethos in Sapa, Traveling to Sapa, Trekking in Sapa